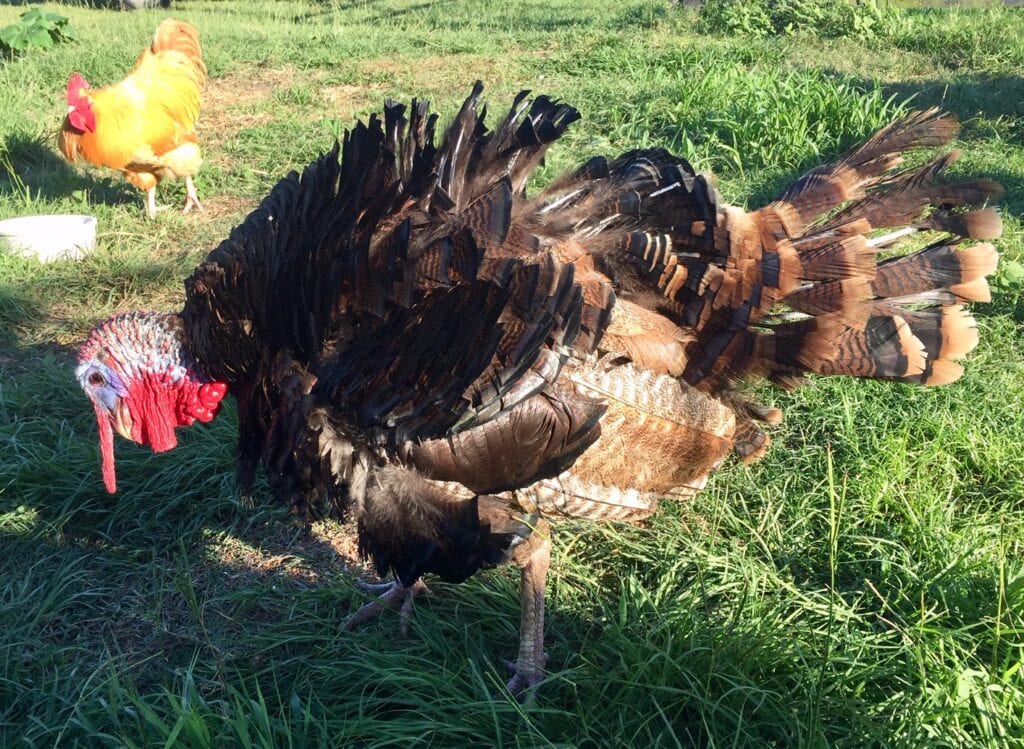 Meet Mr. T, our Rio Grande Wild tom, forever pardoned at Leaning Cedar Ranch.  Admittedly not much of a sacrifice for us as we are not very fond of turkey meat.

A couple months after we got Mr. T, we noticed he had adopted a small flock of the Barred Rock hens (interestingly the hens that most resembled Mr. T’s coloring and markings).  We thought perhaps he needed a turkey girlfriend, so we bought him one.  She was very independent, and accustomed to free ranging on a large property, and exhibited those same traits at our place.  Mr. T never seemed to take an interest, either because he already had his girls, or because she never really got close to the flock.  Sadly, her independence caused her doom and we found her one day near the neighbor’s fence, where a fox liked to stalk and take his chances with our dogs.  At this point, Mr. T seemed quite content with his Barred Rock harem (and remains so to this day), so we didn’t replace our turkey hen.

Like a good rooster, Mr. T is brave and chivalrous with his hens; he guards them diligently while they scratch for food or take a rest.  When we zoom past in our Mule, he will flap his wings and gobble for us to “slow down.”  Whenever we put out treats, he calls his hens over and makes sure they feast.  I often wonder when he gets enough to eat, as the only time I see him eat is when we spread a bucket of corn and millet in the chicken yard (and he happily waddles over – purring as he goes – and pecks away at the millet) or when it’s hot dog time.

That’s right, Mr. T loves hot dogs.  All beef, not turkey, hot dogs of course.  We dice them up and throw a handful out for him each morning.  It’s gotten to the point that he now waddle-runs towards the house whenever he hears the front door open and close and sees us emerge each morning – hoping for a handful of hot dog.  Some days he indulges and eats as much as he can before the hens catch wind and race over to “help”.  Other days he simply purrs and guards the hens as they feast, not taking one morsel for himself.

Our most precious observance yet with Mr. T occurred last week.  One of our Rhode Island Red hens, who was getting old and had mostly isolated from the flock and certainly our rooster (she would literally run to us or into / under the Mule for protection if we were around when Roo would try to mate her), suddenly became very ill.  We noticed she was not well that morning and tried treating her for an impacted crop.  After checking on her every couple hours, we sadly found her deceased in the afternoon.  Mr. T was standing over her, protecting her from prey.  It would all seem perfectly logical if Red was part of Mr. T’s harem, but she wasn’t.  Never even saw them interact in the two years we’ve had Mr. T.